Jerry Kennard is an author and blogger. This site showcases his self-help and fiction

Jerry spent the first 17 years of his working life in the National Health Service. He then moved into higher education, where he taught and researched in matters psychological. In 2008 he removed the shackles of servitude and began working for himself. He hasn’t looked back!

A well-regarded health blogger, Jerry spent a few years as the Men’s Health Guide for About.com. He now contributes to Healthcentral.com, where he is a writer and Medical Reviewer.

Jerry’s background in health and psychology informs both his blogs and books. But, as you’ll see on the site, he now invests more time and creative energy in fiction writing. Fiction books are written under the author’s name of J. J. Kennard.

Thanks for stopping by. Please visit from time to time and catch up with what’s been happening. I’ll be putting new samples up and clips from the audiobooks being produced. Use the contact form to send me a message.

First in the Ursa Series! 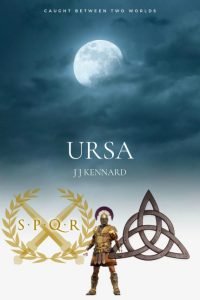 Rome is reeling from the after-effects of a civil war. The troops that marched through Italia have left a wave of destruction. A vindictive message, left on the wall of a family estate, galvanizes Ursa’s father into tracking down the perpetrators and seeking answers. Before undertaking his quest, the sickly former centurion, informs his son, Ursa, that he is adopted.

Caught between two worlds, Ursa seeks both to remedy the cause of his father’s dishonour, and learn more about his heritage.

In this, the first book in the Ursa series, we follow Ursa as he joins the legions, finds what it means to become a soldier, and is deployed to a Britannia that is now weakened and depleted.

Freeaudiobooks.co.uk. If you’re an audiobook author with ACX wondering what to do with all those promo codes, here’s the answer. Freeaudiobooks will promote your books completely free of charge. Founded by me with other authors in mind.

Great for listeners too. Grab free promo codes, direct from the authors and narrators