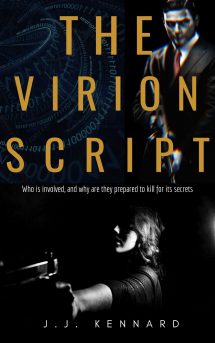 The Virion script project is spinning out of control. As key personnel disappear the finger of suspicion points to the Estonian mafia, and someone inside British Intelligence. Anna Faulkner plucked from a mundane job in cyber-security, is briefed to locate the agoraphobic computer geek, Tom Morris.

What a page-turner, could not put it down till the book was finished.
Amazon:
a spontaneous purchase, turned out to be a cracker, interesting idea, good characters and well written. Read it straight through, a rarity for me.
Amazon:

Is Morris the victim of mistaken identity or can he really be the brains behind the Virion Script? Anna is soon immersed in a world of hostility and disinformation as she tries to determine the nature of the Script, who is involved, and why they are prepared to kill for its secrets.

This book is free to subscribers of Amazon Unlimited.